Artist Name: Glenn Pearce, though I will sometimes answer to the Zombiechickencatcher
Legal Name: Glenn Pearce
Location: Frankston Victoria Australia
DOB: 3/01/1975
Profession/Primary Skill: two decades working as a chicken catcher on farms and factories after I was kicked out of artschool
Preferred Medium: pencils on paper. if I had cash I’d paint with oils on linen at a monolithic scale
Your latest/favorite publication(your work): As of writing this I’m putting all my books (comics but mostly graphic novels) on Lulu books print on demand. I’ve been making underground Australian comics for thirty years at this point. I started with selling zines at comic shops when I was fifteen. To over the years having no interest in pimping my books to folks I don’t know. So up till the end of 2020 I only shared them with friends. The poet cartoonist Casanova Frankenstein pushed me to put my books out. So there is sixteen or more books I’ve made. Some with other collaborators but most on my own. It’s only now that I’ve said all I have to say in my comics that I’m happy to let this stuff go. I’m actually leaving comics at this point, though I still intend to draw stories for a few friends.
Way I look at it I’ve reached stage three in my art making life. Started drawing as a little kid then was the first person in my entire family to ever finish highschool, and then kicked out of The Victorian College of the Arts. Suffered a Psychotic break and was subjected to shock therapy 36 times. From then a life catching chickens and making art on weekends. Till my mid forties just making art full time. I’ve been making whatever I want even without the encouragement of money. I’m living the dream.|
What social media would you like people to follow you at? : Only have a YouTube channel I almost never use. Dumped all the others over time, the ego maniac world is not for me. I did meet some good people though I still consider friends. David Arshawsky is an excellent underrated artist I met when I used Facebook.
Do you have a Patreon to support?: Hell no. Money and art to me makes me concerned.
Where can we buy your work? Only Lulu Books. I love the underground quality of it. I’m even suss on giving info out here as aside from the books I made with others. I don’t encourage people to read my stories, I’m a mess. With no endless following and hashtags on social media there’s a big element of chance, digging and word of mouth to find my books.
https://www.lulu.com/<<
What is your latest project we should be looking at for?: I’ve been doing alot of art with activists in response to institutional child abuse in Australia. So if all goes well there should be a decent exhibition at the Ballarat Australia gallery in 2021.
Besides comics, are there other kinds of arts you do?: I draw everything from portraits, still life’s to landscapes. I’ve also and still do alot of film design. Designing monsters is a lifelong obsession I’ll never quit. It’s like comics, I’m addicted and no matter how often I try to put it behind me I can’t.

*Inspirations:
Favorite Music/Bands: Music is more inspiring to me than most other forms of creativity. Most creative folks I’ve known are musos, they don’t tend to follow the rules of the art world so much. The Doomed Bird Of Providence, Powerline Sneakers (from Australia), Beastianity, Warped (from Australia, not the festival), Splatterheads, Powder Monkeys, Bored, Nazxul, Hordes Of The Black Cross, Bongwakers, Damaged, Blood Duster, Grant Hart, Monster Magnet, High on Fire, Big Black etc…. Are some bands I listen to. It’s a longer list than this.
Favorite Comic Artists: Casanova Frankenstein. I’m a longtime fan and am lucky to call him a mentor in comics. Al Columbia and William Cardini are cool. Crumb and Burns do it for me always. I’ve never read Chris Ware and I’m sure he’s great. I never liked Maus as a kid but do now.
Favorite Comic related publications: The entire catalog of Domino Books, Fantagraphics and anything by Tim Goodyear’s Teenage Dinosaur. Tim as with Austin English both hold the best of the qualities of the late Dylan Williams. I live in Australia and am not involved in any local scene or have never been to a convention.
Favorite non-comic artists: So many to say… Clive Barker comes to mind and Richard Stanley.
Is there anything you collect? I used to collect alot of books/comics and records, that I no longer have. So when I can I might buy that sort of thing.
Other Inspirations: I do get inspired by outside things, though I’d hate to be categorized or part of any cabal. So while not being a slave to my own taste, I get to be consumed by some odd things I wouldn’t normally choose to like. But I wouldn’t know how to not make art. There is never enough hours in the week. I don’t understand why everyone else doesn’t make art.
Favorite Links: I like Ben with a pen on Instagram. I think Ben Davis is a pretty interesting Australian toonist. https://www.instagram.com/ben_with_pen/

Bloodhound fx is my film partner. We spent ten years making a no budget film called Hitler Lives 2017 that no one watched. https://www.facebook.com/bloodhoundfxstudio/

What artist/creators/comix do you feel are underrated or unknown? I’m sorry to say I do like alot of artist’s work, I’m well read on the subject. Though I really only care about my friend’s art. I havn’t had many instances of collaborative kindness and have been burnt many times. So I’m pretty focused on the few good folks I know. The Australian artists Robert House and James Money. Evilstoo and Morte from Bloodhound fx. Mark Kluzak’s band in the UK The Doomed Bird of Providence. Sly, Johnny, Katie and Hirsty’s band, Powerline Sneakers. Plus Casanova Frankenstein the hugely underrated American cartoonist.
Making art is weird to me always and looking at work by people I’ll never meet is a great source for ‘copy.’ Though it’s the real friends who work hard with the fire of life that I care about. There’s more energy and empathy there in what they do, than I can absorb in several lifetimes.

all profiles were answered by the artists themselves. 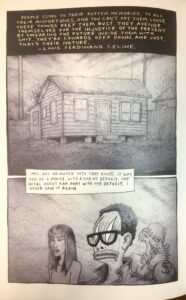 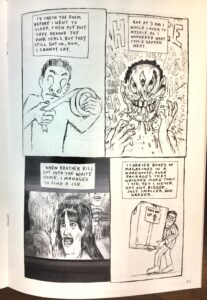 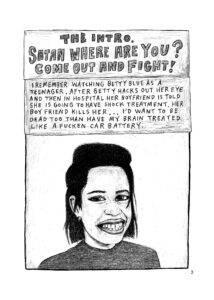 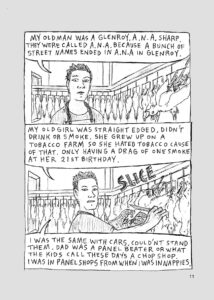 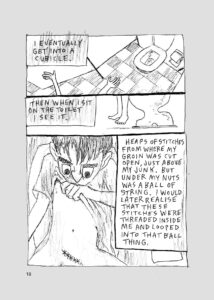